Hashtags & The @ Symbol: What’s The Difference and Where To Use 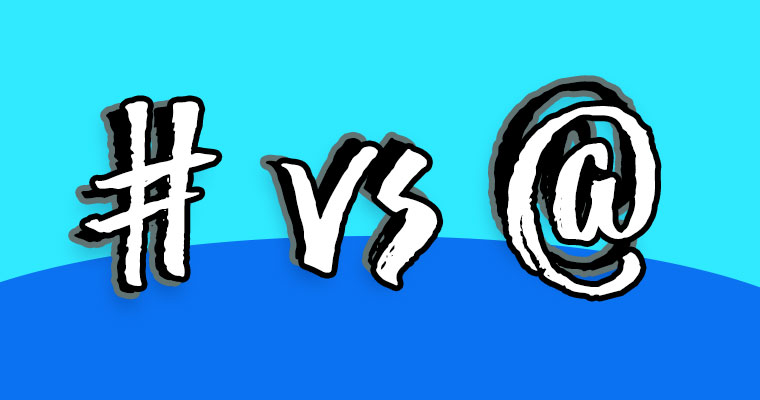 #leadsymphony: when you mention are talking ABOUT lead symphony.

Let’s pick something specific, in a specific circumstance.

When you use #leadsymphony, it links that post with any other post by anyone, anywhere with your post. So when someone searches “lead symphony,” they’ll get results for any social media post using that hashtag.

In the trade show we just went to, the proper hashtag to use was #winthestorm.

Any vendor or person taking a photo or making a post about the event or from the event would want to use #winthestorm in their post to get more attention for their post.

It gets them more publicity and exposure by pulling their content up beside other content from the same event.

When you use a hashtag on a photo on social media, it causes the image to get more exposure to people who never would have seen it otherwise.

People who don’t know you can find your work when you use a hashtag that is common.

@leadsymphony: when you are talking TO or TRYING TO GET THE ATTENTION OF Lead Symphony

Think of at symbol (@) as tagging someone or some company. That entity gets a notification that they were mentioned.

On Facebook, if you take a pic of you and a friend,  you would @yourfriend to create a link to them, too. This also puts the image on their page if their preferences are set to show tagged images.

Tagging celebrities or big companies will often get your post read by that entity.

In Skype or Trello, use @person to notify that person that the post is meant for their eyes, too. In group texts, like we use in house, use @kirby to let kirby know you are addressing him or trying to get his attention.

Using both works on several  areas of social media. Twitter is a great example. For the trade show we just attended SVG – Win The Storm:

Essentially this pulls up everything on Twitter about the event, and notifies SVG that you mentioned them:

“Excited to present at @SVGCorp #WinTheStorm conference March 3-4 in Las Vegas! http://www.WinTheStorm.com … Win The Storm is a MAJOR success.”

What was the first hashtag?

Chris Messina, a social technology expert, is credited to have come up with the very first hashtag on Twitter. He first posted the hashtag #barcamp in August 2007.